‘Sweet Infidel’ by Jamaica’s Zoya Taylor was selected this week for the first prize Award at the 2015 International Juried Exhibition of The Center for Contemporary Art, New Jersey. In the painting she uses one of her wide eyed characters with skinny bodies which have become her trademark.

Zoya Taylor was born in Vancouver, Canada; grew up in Kingston, Jamaica; and now lives in Norway. She is the daughter of a Jamaican father and a Canadian mother. Although she took drawing classes as a child and always had a desire to be an artist, she focused on full-time painting only ten years ago.

“I do not paint portraits but rather the odd and marginal characters which fill the spaces in between. They communicate the different facets of humanity. My cast is the cast of misfits; they are immigrants found between cultures, continents, languages and disciplines” – Zoya Taylor. 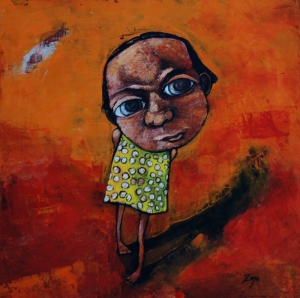 That is why her characters have a worldly but innocent look; and that is why they are emotional. In her series, running now for ten years, Zoya Taylor’s characters have been known to feel  it all: anger, shyness, love, insecurity, everything.

Her work has been exhibited in the USA, Norway, Germany, Italy, Spain, England and Jamaica. The exhibition in New Jersey’s Center for Contemporary Art showing her ‘Sweet Infidel’ opens on November 6th 2015 and runs to December 12th 2015.